East Syracuse Fire Department
About Us

Location
The East Syracuse Fire Department is an all volunteer fire department protecting the Village of East Syracuse and the Northern part of the Town of Dewitt. We are located in Onondaga County, just minutes from Syracuse, New York.

In the fall of 1887 a group of residents of the Village of East Syracuse organized a fund drive for the purpose of forming a volunteer fire department. In May of 1888, the department's first three companies were formed consisting of the AD Ellis Engine Co., the Victory Hook & Ladder Co., and the JL Kyne Hose Co. There were thirty five founding members.

Apparatus was a horse drawn hook and ladder truck, a hand drawn / hand operated pumper, and a hand drawn hose cart. These were housed in a rented building on East Manlius Street just north of the railroad.

In 1893 an Engine house was erected on Park Street, the building became the Municipal Building, and the street was later changed to Center Street. The formation of the CC Bagg Hose Company also occurred.

In 1959, a survey conducted lead to the construction of another fire station closer to the Industrial Park area of East Syracuse. This caused the addition of a Station 2 and construction was completed in June of 1960.

In addition to the number of calls for service and apparatus at both stations, the membership reached its capacity of 120 men.

On the morning of February 3rd, 2007, Station #2 located at Kinne Street & Route 298 was closed, and a new facility on Sanders Creek Parkway was open.

The department responds to 1,000+ alarms annually covering an estimated eight square mile district. The protection area entails the Village of East Syracuse; Erie Blvd between Bridge Street and Thompson Road; follows the Syracuse City line to the West; North to the Town of Salina line, to the airport / Taft Road and East to the DeWitt town line. The department also protects  portions of the New York State Thruway and Routes 690 and 481.

The Village of East Syracuse Volunteer Fire Department managed by the Chief, Assistant Chiefs, and fire line officers, functions as the body that responds to all emergencies and provides service within the protection district. The department members annually elect a Chief,1st Assistant Chief, 2nd Assistant Chief, 2 Captains, and 4 Lieutenants. 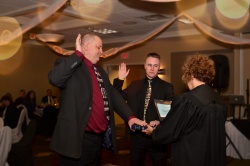 Copyright © 2006-2021. YourFirstDue Inc. All Rights Reserved. Designated trademarks and brands are the property of their respective owners. Content on this web site is supplied by East Syracuse Fire Department. YourFirstDue Inc. cannot be held responsible or liable for any content, text, pictures, or any other media found on this web site. Maintained by the members and staff of East Syracuse Fire Department.
Management Login
Powered by